“Independence of Justice and the Rule of Law”

It is an honor for me to welcome you all at today’s Conference of Ministers of Justice which is held within the Greek Chairmanship of the Committee of Ministers and with the support of the Council of Europe.

Although our physical meeting in Athens was obliged to alter due to the extraordinary times we are living, still, we manage to meet by using the technology and so to seize every opportunity to discuss different aspects of one of the three pillars upon the Council of Europe was established, the principle of  Rule of Law.

One of the core elements of the principle of Rule of Law is the right of access to justice. Our citizens deserve an independent and impartial judiciary and to be judged fairly, equally and in time.  Independent and effective functioning of any justice system is a precondition for the enjoyment of all rights and freedoms. If the citizens do not trust the judiciary or they do not have access to justice then the democratic societies cannot function.

The recent discourse in Europe about the new challenges facing the rule of law and especially, the need for justice systems to respond to the extraordinary times due to health crisis, advocate for the strengthening of the protection of individuals’ rights such as the ones that rule of law enshrines.

As you all now, under the general theme of today’s Conference “Independence of Justice and the Rule of Law”, I have the pleasure to invite you to share your views upon two thematic sessions.

The first one with the title, “New challenges for the rule of law and the guarantees for independent Justice” focuses on the independence of judiciary and on the ways public authorities could guarantee this principle in practice, in nowadays.

The independence of judiciary by definition requires mutual respect between all three branches of the State. So the judiciary must be able to function in full independence and impartiality and be protected by the constitution and law.

As the social needs expand or a crisis may cause disruption, the governments could contribute by providing the appropriate legislative framework which fill in shortcomings or inconsistencies of judicial systems. Consequently, one may ask: What kind of legislative amendments could be appropriate? For answering this question, I suggest to rely on our common values and principles and find the answer. The ones which respect the judicial autonomy and protect judiciary from interferences.

Independence and impartiality are possible with constitutional and law guarantees and with the establishment of a secure environment for judiciary to function.  Public authorities should not be involved in the procedure of appointment or promotion of the judiciary. On the contrary, it is needed a full administrative support for the judiciary to carry out their duties without the interference or threat of governments or political parties.

The respect to constitutional provisions as well as amendments of relevant legislation are some of the guarantees that governments could ensure. Furthermore, special measures and policies attribute to the safeguarding of judiciary’s right to independence and also the contribution of legal professions towards this purpose.

We should not also disregard in our discussions, the role of the Council of Europe which not only encourages us all, to abide by our legal obligations but also offers us the multilateral space, based on common values and principles, necessary for our sincere communication and cooperation. Cooperation and trust are essential elements in order to overcome any crisis.

Within this spirit, we welcome today the Council of Europe’s CEPEJ’s 2020 Evaluation Report on the main trends in judicial systems in 45 European countries. Today, Mr. Gurbanov (CEPEJ’s President) shall elaborate in the work of CEPEJ regarding this report and the way it inspires us all to work harder for the efficiency and quality of justice in Europe.

In the same vein, I would also like to refer to the EU Justice Scoreboard which is an information tool and provides a comparative overview on the independence, quality and efficiency of justice systems and the newly established European Commission’s mechanism for preparing the annual Rule of Law Report.

When impartiality and independence of judiciary are not sufficiently guaranteed, then people lose their faith in the function of justice and democratic institutions.

And that brings me to the second thematic session with the title “How to strengthen citizens’ confidence in justice”, which offers us the opportunity to discuss the public’s perception about justice systems. As we often say: justice must not only be done, it must be seen to be done. Particularly, under emergency circumstances, we have the duty to further improve the resilience of our justice systems and its consistency for citizens’ sake.

These can be done by adopting and implementing legislation and policies which support digital justice, modernize judicial systems, and facilitate the accessibility of citizens to judicial function. Any modernization of judicial systems has to serve the efficiency of justice. We understand that digital justice and allocation of more resources for justice are some of the political actions which improve the efficiency of justice services. Our experience from the start of the pandemic crisis has shown that technology and electronic tools are vital for the function of and accessibility to justice.

Other provisions such as legal aid mechanism, accessibility to public documents and judgments, training of judiciaries and legal professions contribute to the openness of justice to people.

The citizens deserve an independent and efficient justice, which safeguards and promotes their rights.

Within this context I would like to share my experience, having recently submitted for parliamentary approval a new law which supplements the already existing legislation regarding civil cases. This new law includes provisions which facilitate the acceleration of civil proceedings for the pending debt cases and other amendments regarding legal aid in mediation procedure and code of the legal professions. The internal logic is that law never stops to serve our citizens especially under hard times such the ones we are experiencing.

I am looking forward to hearing your suggestions on these themes, but before proceeding to our discussions, I would like to give the floor to our distinguished speakers, starting from the Secretary General of the Council of Europe, Ms Burić. 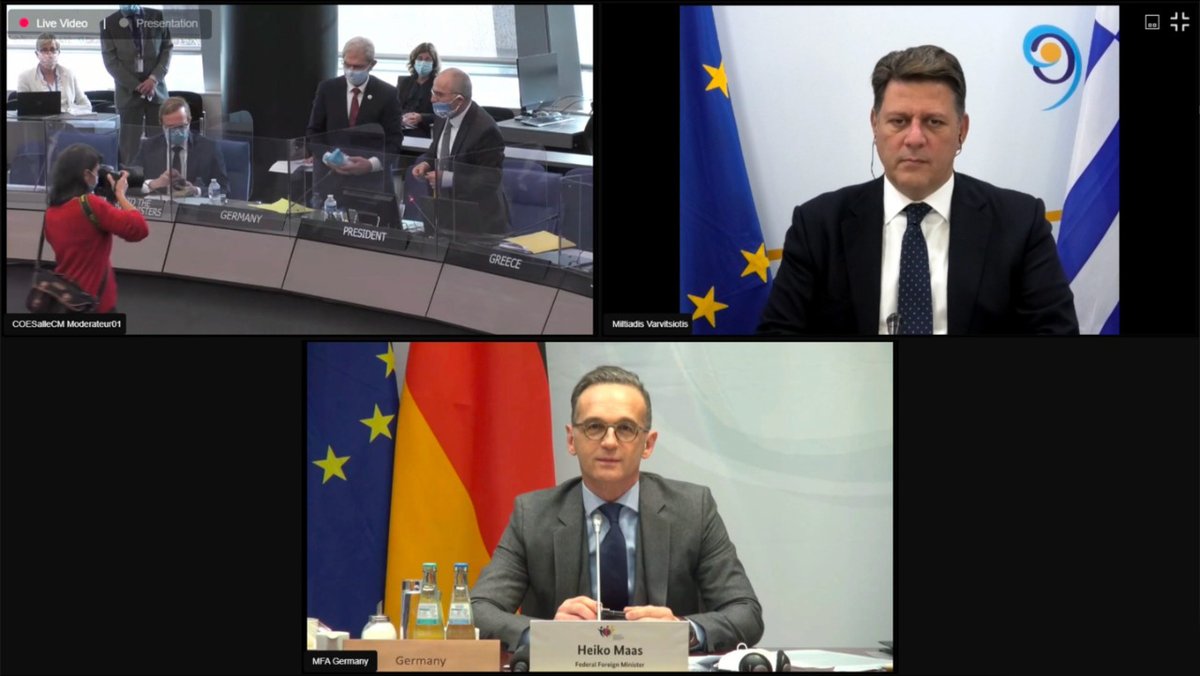 Varvitsiotis Miltiadis @MVarvitsiotis
As 🇬🇷 hands over @coe Chairmanship to 🇩🇪 I would like to stress that in 🇪🇺we all have one task: To defend & promote Democracy,Human Rights&the Rule of Law. As nothing is for granted we always need to assert & renew our dedication to our values. @GermanyDiplo @GreeceMFA @coe2020gr https://t.co/WKIE5MNdyD
4
13
Greek Chairmanship Council of Europe @coe2020gr
1 year ago
Join us in a few minutes for the Press Conference of 🇬🇷Alt. FM @MVarvitsiotis and 🇩🇪FM @HeikoMaas regarding the Handover of the Chairmanship of the Com. of Ministers of @coe. 🇬🇷🇩🇪
Watch live:
https://t.co/wS5YywczY7
View on Twitter
2
7
Greek Chairmanship Council of Europe @coe2020gr
1 year ago
Today marks the end of the Greek Chairmanship of the Committee of Ministers @coe2020gr. Join us online for the Handover Ceremony from 🇬🇷Greece to 🇩🇪Germany at 13:00 EET (12:00 CET). @GermanyCoE @GreeceMFA @GermanyDiplo @MVarvitsiotis @HeikoMaas @coe
LIVE: https://t.co/wS5YywczY7 https://t.co/YzClKTBd4Y
View on Twitter 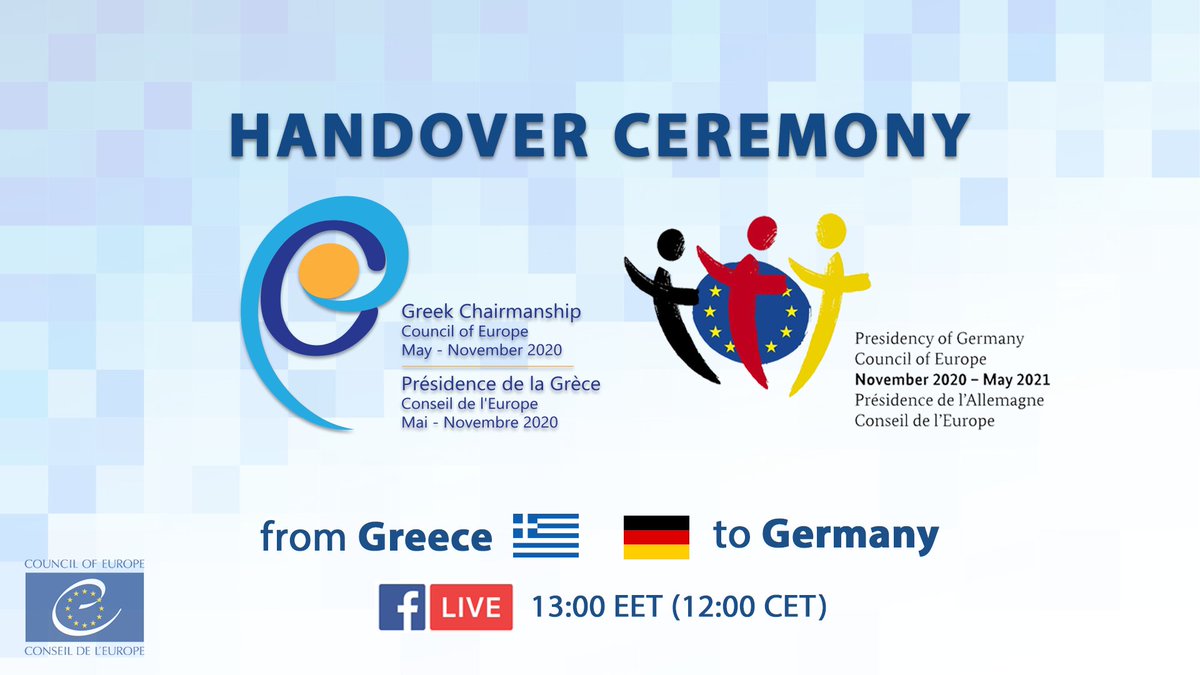 22
40
Greek Chairmanship Council of Europe @coe2020gr
1 year ago
Join us as we are going live in a discussion with Mrs Marianna Vardinoyannis @M_Vardinoyannis!
Watch: https://t.co/wS5YywczY7 https://t.co/caPRk1FH9X
View on Twitter 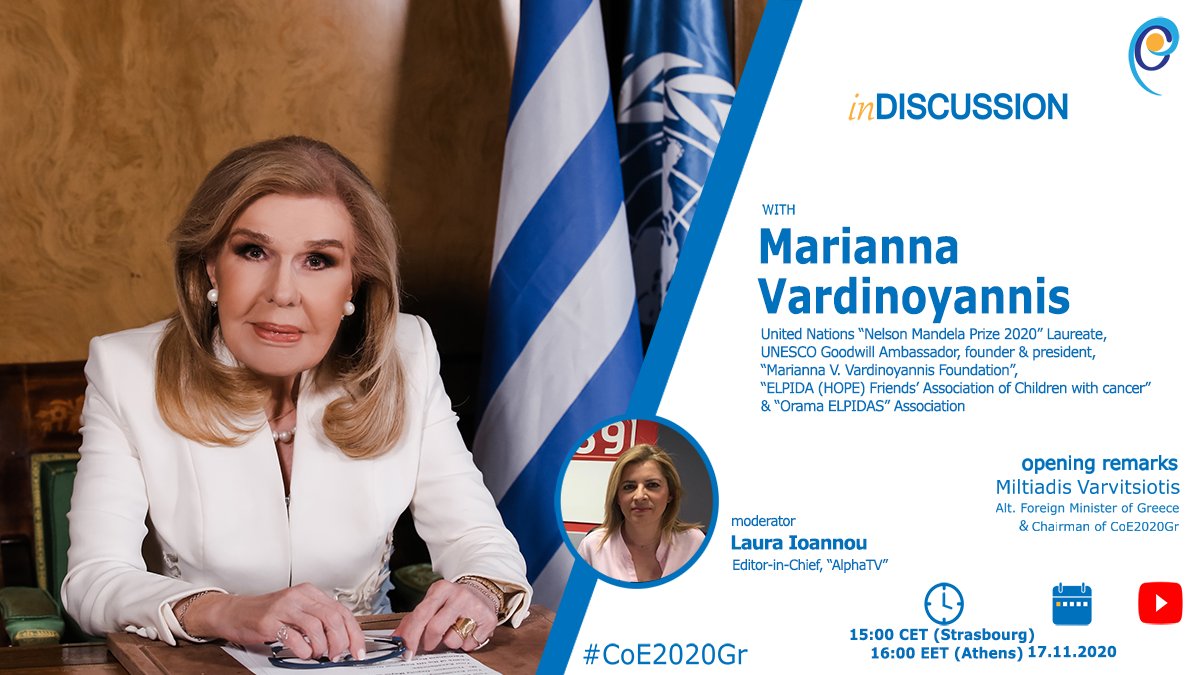